I stared in resignation at the pouch-like underbelly that contained all of the entrails of Rana, the unfortunate amphibian in front of me. It looked so fresh.

No matter. Best to get this over with as soon as possible. Singh Sir had a zero-tolerance policy towards miscreants in his class and the orders were simple enough. We were to chop up the poor bastards in the two periods before Macbeth or fail biology.

No one who ever sat through Singh Sir’s biology practical class would ever be able to look at a frog the same way again. Resting on the dissection board with arms and legs strewn unnaturally like a martyr was an anesthetized specimen. A few hours earlier, it had been hopping on the grassy knoll, licking buzzing winged-insects in blissful ignorance of what Lab Instructor Mahato had in store for it.

Mahato caught my specimen along with the others and kept in a see-through plastic bin with a few small holes at the top. As class started, he put it in a plastic bag with a little bit of chloroform and shook it up vigorously until it became limp. I imagined that I saw an sadistic smile on his face and an evil glint in his eyes. What other reason could there be for subjecting us to this unnecessary spectacle? Couldn’t he have done this before class?

My mind wandered. The humid air was rank with chloroform and somnolence. I could hear the blades of the fan slicing the heavy air with gurgling sounds. In this funereal setting, a bunch of lily-livered Indian high-school students stretched out frogs and pinned them down to the gelatinous surfaces of dissection boards. It was as if we were the Roman sentry crucifying Jesus. Of course, all of this was part of the plan. The innards of the prisoner were to be released and to be sketched out in nauseating detail in the lab notebook. 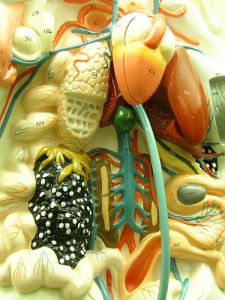 “Take your scalpel from your dissection kit and make an I-shaped incision,” advised the manual. Those of us who had not eaten breakfast obliged more willingly than the others. “Pull back the flaps of skin and pin down,” the manual instructed, as if doing so were as natural as opening a window in the morning to let in the warm sun.

With much trepidation, I ran my scalpel across the turgid, rotund underbelly. The beast opened up like an overfilled pillow. There was little blood.

I lifted the flaps of skin and pinned down to the sides as instructed. It was then that I first peered down the hood into the chassis. Rana’s outstretched body-cavity with all the glistening organs was there to behold in grisly, naked glory. Barely a centimeter in length and squirming like a caterpillar was the heart, which was surrounded on either side by tiny lungs that looked as fluffy as gossamer. I sharpened my dark drawing pencil and began to draw Rana’s organs on to the rough sheet of paper in front of me. I pressed too hard and broke the lead.  I erased the outline and swatted away the gritty mix of lead and rubber shavings. I started again.

I was interrupted by Joydeep who was shifting nervously in the bench next to mine. I looked up and saw that his specimen had exploded releasing tons of shiny, round eggs.

I began to feel queasy. How I got through the rest of class, I do not remember.

Needless to say, it was not Leonardo Da Vinci that sketched the symmetry of life in his notebooks in biology class that day. The chicken-scrawl I handed in to Singh Sir was labeled with the names of organs that I copied from the textbook at home.

I didn’t fail biology and my parents were happy.

Years rolled by and I moved on. Rana perished like many of the finest four-legged amphibians of his generation in the sweaty classrooms of Indian high-school and college campuses. Seventy million died in flashlight-driven purges in the heydays of the foreign-currency generating frog-leg industry. Two endemic species of amphibians were discovered only to go extinct locally soon thereafter.

I have heard the argument from educators that dissections of small animals such as frogs are useful because anatomically they resemble humans. I can say this: there was certainly nothing humane about what we did in class that day. We did not cut up the animals for the sake of devouring them or (ostensibly) advancing human knowledge; we did it to pass a course which we were not interested in. I often wonder if we could not have learned the same information by looking at diagrams or plastic models.

Very few of us pursued careers in medicine. I suspect that the dissections in the grimy, hot classroom that day taught us more about ourselves than we were prepared to learn.

Perhaps, it is the realization that like frogs we are essentially a messy bag of chemicals waiting to get chopped up, incinerated, or buried six feet under?