In Ovid’s famous Latin poem Metamorphoses, Pygmalion was a sculptor who fell in love with a statue of a woman he had created. On Pygmalion’s entreaty, this statue was granted the breath of life by Venus.  Western literature and art is filled with many variations of the Pygmalion theme, of which arguably, the most notable is George Bernard Shaw’s play by the same name.

I bring up the Pygmalion myth for one reason in particular. It is not uncommon for an artist to be emotionally attached to created art, and certainly aesthetically pleasing sculptures of the gods and goddesses used for worship during Durga Puja qualify a art. But just as the idols used in Durga Puja are brought to “life” when they are granted eyes through a formalized ceremony, they are also immersed after the tenth day of worship. The only exception, I know to this general rule applies to festivals held outside South Asia, where for practical purposes, new idols cannot be transported every year.

As Durga Puja ends, a familiar sight unfolds in which the clay idols of the goddesses and gods are transported to the banks of rivers and immersed to the beats of the dhaak and to the cries of “How long with Pujo last? The idols will be immersed”. After the lavishly-adorned idols are thus dispatched, the followers return to their homes promising to each other, “It will happen again next year; we will move forward every year.”

I recall reading a passage from Christopher Isherwood’s Ramakrishna & His Disciples in my childhood that recounted how easy it was even then to get emotionally attached to the ornate idols. The moral of the story, however, was that it was imperative for the idols to be immersed after worship to demonstrate their impermanence. And that is the general principle even today: no matter how beautiful the sculptures of the gods and goddesses, they are temporary. A Pygmalion-theme tailored to Hindu gods and goddesses would require the destruction of the idols in the end, regardless of whether or not the sculptor fell in love with them.

That is why the clay sculptures used in previous centuries in the autumnal worship of Durga no longer exist. The only way to “see “them is in two-dimensional drawings and photographs. Of course, Durga, in her most popular form, Mahisasuramardini, the slayer of the demon Mahisasur, is visible beyond clay idols used in the autumnal Durga festival. Stone icons of Durga are very popular and can be found in many Hindu temples, extending from southern India to Indonesia (for example, the friezes in Borobudur).

The Indian Museum in Kolkata contains numerous artifacts of special significance. Unfortunately, this museum has not fully digitized their collection, so there is no way to view the images of Durga in their holdings from the comfort of one’s home. The British Library, on the other hand, has a number of priceless holdings that shed light on the iconography of Mahisasuramardini through the ages, that can be viewed online.

One of the most arresting images in their collection is a photograph taken by Nicholas and Company in 1880 at Mahabalipuram in Tamil Nadu, showing a sculptural frieze of Durga seated on a lion, shooting arrows at Mahishasur. 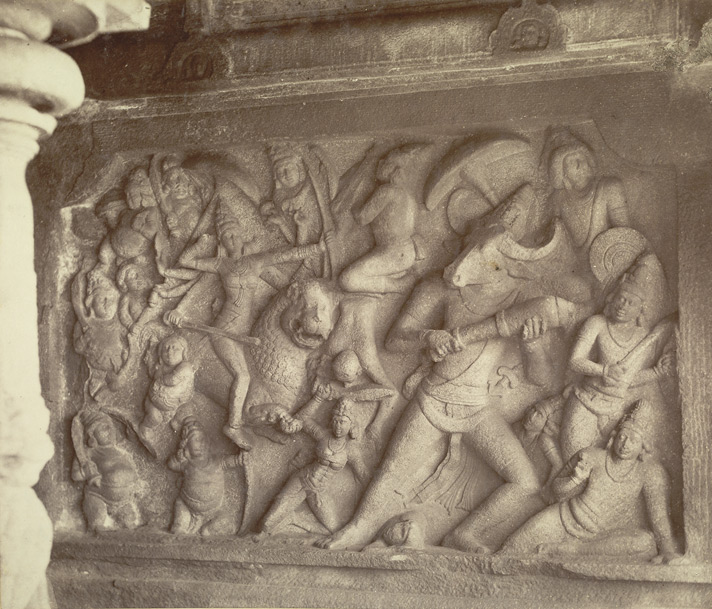 Here, Durga is depicted in battle riding a lion crafted in classical style and Mahisasur has the head of a buffalo. Another photograph of Durga is from sculpture panel on the façade of the sanctuary of Baitala Deula in Bhubaneshwar, from the Archaeological Survey of India Collections (photograph taken by William Henry Cornish in 1892). Here also, Mahisasur, is depicted with the head of a buffalo. 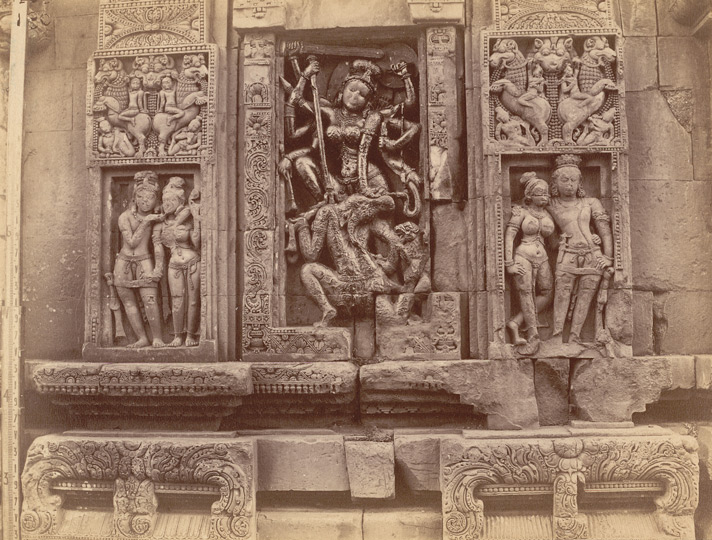 Among other images, is a photograph taken by Joseph David Beglar in 1872-73 in Dulmi (in what is now Jharkhand). 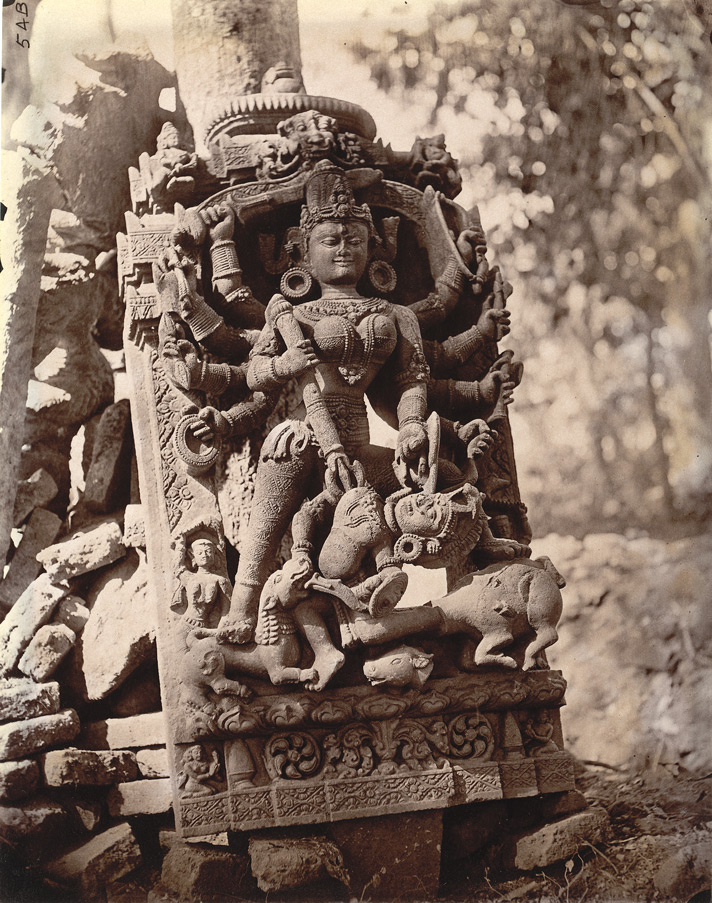 In addition to sculptures associated with temples, there are quite a few paintings and drawings of Durga in public and private collections across the world. However, there are fewer artistic depictions the clay models of Durga Puja as the autumnal festival from previous centuries. One of the few images, a watercolor from 1809 depicting devotees during Durga Puja (created by Sevak Ram in the Patna style), is quite spectacular. 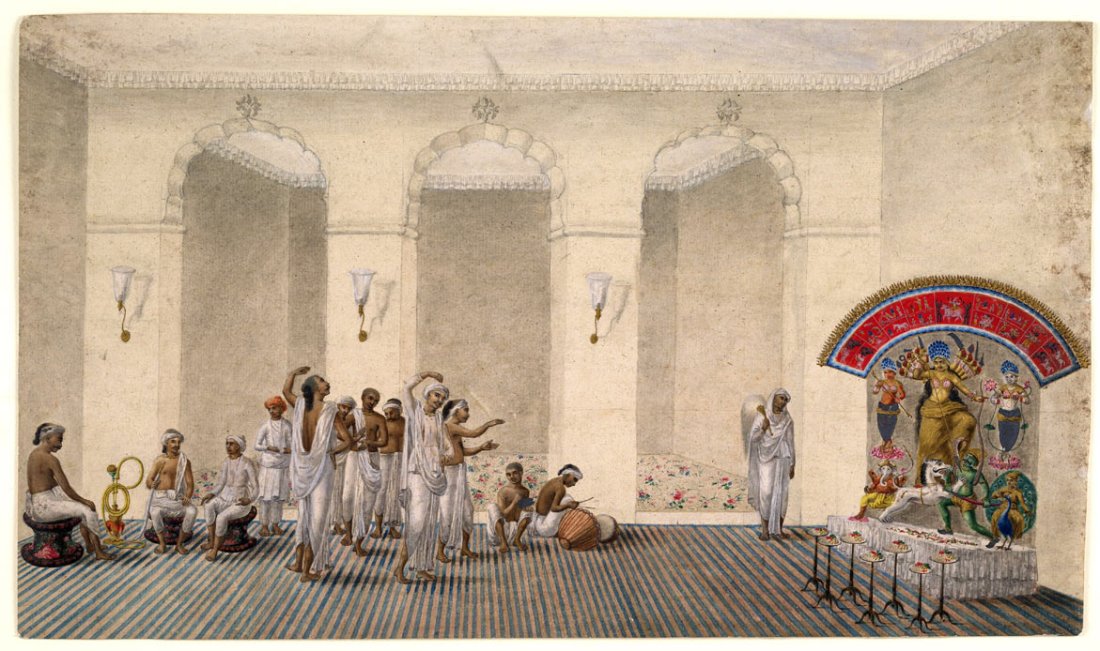 While researching the topic, I stumbled across one of the most interesting images of the idols of Durga Puja hidden away innocuously in a book by Charles Coleman (The Mythologie of the Hindus, 1832). The drawing featured in the book is a reproduction of clay models for worship of Durga, Kartik, and Ganesh crated by the Bengali sculptor, Chitta Roy. Saraswati and Lakshmi are conspicuously absent from the representation. Karthik resembles the Bengali gentleman of the day, and at least in my mind, Raja Rammohun Roy. But the most amusing icon in the drawing is Mahisasur, who with long noticeable muttonchops, looks like an officer of the East India Company! 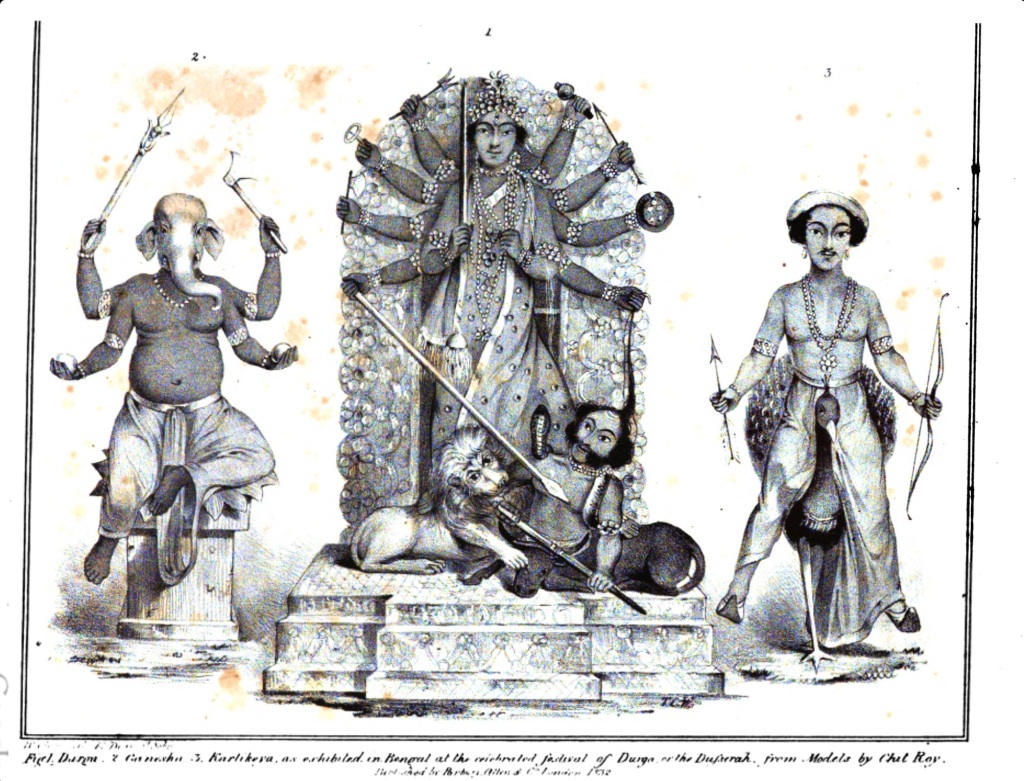 4 thoughts on “Durga Puja through the ages”