It is late evening on Nabami. Assembled in front of the pyramid-shaped pandal of the Tarun Sangha Sarbojonin Durgotsav is a huge crowd of men, women, and children decked in their finest attire. This is no ordinary pujo: This year, Ma Durga doesn’t look like Mahua Roychodhury, Mahishasur doesn’t look like Lionel Ritchie, and the lion doesn’t look like Rameez Raja. No, the club has spared no expense in arranging an Egyptian themed-pujo with idols from Kumartuli and lights from Chandannagar. There are hieroglyphics on banners and festoons (courtesy of Bapi Poultry House). There is a temporary fountain in the form of a Sphinx with water coming out of its human mouth. Ma Durga has been meticulously crafted to resemble Queen Nefertiti, albeit with the traditional ten hands. And the gods, goddesses, demon, and associated animals are all dressed like pharaohs.

People have traveled for miles by bus, tekar, and shared taxi to see the pandal here. And indeed, a short while ago, an entire family of fourteen members disembarked from a compact car.

The crowd is being directed by two police officers and a club-member on the microphone, “Please enter only through the gate marked entrance. Men, please don’t use the women’s entrance. Please keep the peace.”

The pandal and the fountain occupy the centre of a large field repurposed for pujo festivities. Around the perimeter of the field is a ring of small shops selling items such as imitation jewelry, plastic toys, balloons, and bright buckets. There are shops with mounds of piping hot sweets such as jilipi, goja, baborsa, and dhakai-porota, strained straight from the oil. There are also busy benches lined up with people enjoying bhejitabil chop, ispeshal biryani, moton roll, and coldinks. In various strategically located parts of the field are small carts with moshlamuri, bhelpuri and roasted nuts. 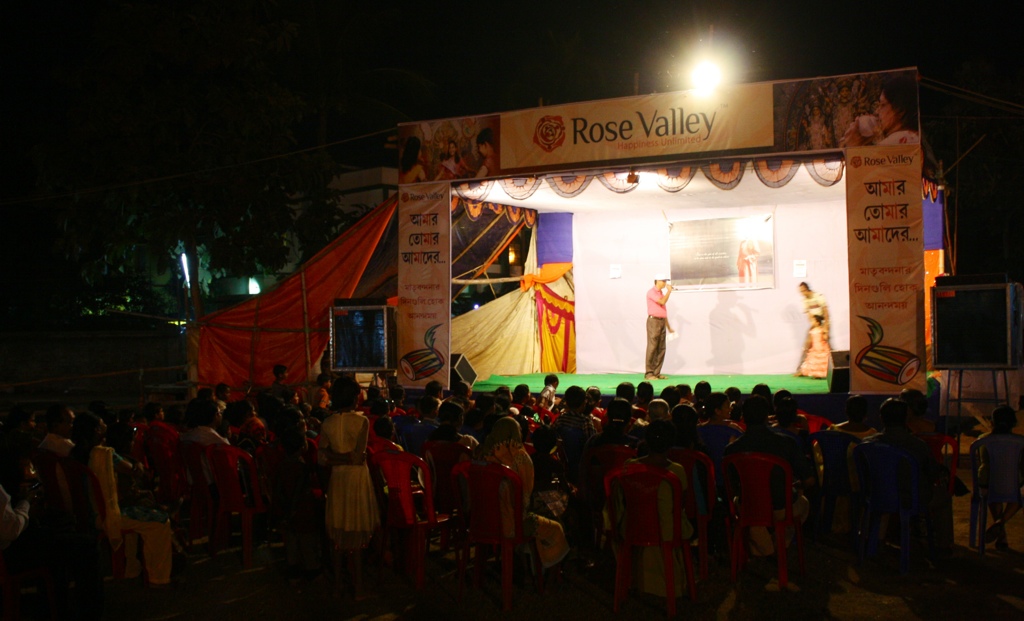 In a corner of the field, there is makeshift stage, in front of which are rows of occupied, red plastic chairs. A man wearing a baseball cap is hosting the para cultural festival (sponsored by Adhunika Jewelry Museum). Now, the host is announcing in his best baritone Satinath Mukhopadhyay impression, “Our next performer is Mishtu Pramanik. Mishtu, wherever you are, come up to the stage. The audience is waiting for you.”

Seven-year old Mishtu steps on to the stage holding her father’s hand. She is wearing a new pink dress. She steps up to the microphone and starts to recite Tagore’s “Shonar Tori”. Although she has practiced the poem many times, she takes one look at the audience and freezes. Tears well up in her eyes. She does not remember beyond the first stanza.

In a few moments, Mishtu’s father will comeback up on the stage and escort her away. It is no big deal. Everyone is here to have a good time. Tonight, her father will console her by buying a very large bar of chocolate for her. Tomorrow, she will wear another dress that she hasn’t worn yet and they will go pandal-hopping. She will be happy because she will see more thakurs than anyone in her class.

While Mishtu is trying to remember the poem she memorized, Avik is in the audience. He isn’t looking in the direction of the stage. Instead, he is scanning the crowd for a familiar face. Pujo has not been going well for him this year.On Saptami, he did not see Paromita as he roamed the streets with his friends. He did not see Paromita during pushpanjali on Ashtami morning. Tonight is his last opportunity. After all,the clock is counting down to the end of another Durga Puja!

And just as he is about to give up all hope, Avik sees Paromita in the crowd. She is with her friends. His face lights up. He straightens his collar and walks up to her. She sees him too.

Paromita does not answer rudely, but rather smiles and answers in the affirmative. They continue to talk for a while and then awkwardly go their separate ways. Avik is on cloud-nine. It has been a successful Durga Puja. Tomorrow, he will wear a bright floral shirt and dance to his heart’s content with the procession of idols all the way up to the river bank. He will stay until the idols are immersed and return in the early hours of the following morning, making sure to walk by Paromita’s house.

(This is an edited version of my column.)