After spending close to a week on St Thomas in the Caribbean, I came very close to the possibility of being stranded there for an indefinite period. At the small airport in Charlotte Amalie, a few hours before scheduled takeoff, tourists were camping out for the long-haul as airline staff announced over the public address system that one flight after another was being diverted to San Juan in Puerto Rico instead of attempting to land on the single runway. The culprit was Hurricane Otto which had formed over the Virgin Islands as my departure date approached, and it was pounding down with the vengeance of a chancellor of a German Empire.

The idea of being trapped in paradise suddenly seemed unpalatable. 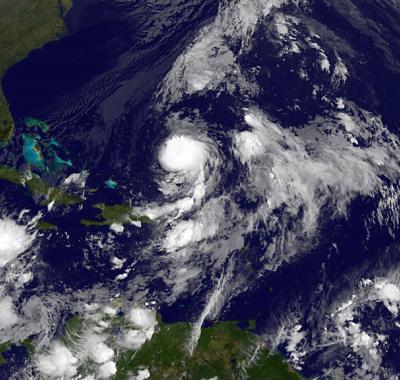 Fortunately, the whiteout let up for a few minutes, which was sufficient time for the small propeller-driven plane to land. All the passengers were rapidly marshaled on to the tarmac and after boarding the aircraft in drill-worthy time, the plane whirred off towards the calmer skies prevailing over Puerto Rico.

Tragedy had been averted, but the entire episode had me thinking about hurricanes and cyclones. How the blazes do they ever get named?

Well, in the Atlantic Ocean, tropical storm and hurricane names are selected alphabetically in advance each year, alternating between female and male names. So, just before Otto, there was Nicole. Also because there are only six lists, the names rotate every six years. The only names that get retired are the ones which cause some really hardcore devastation. It kind reminded me of how in some sports, teams retire the roster numbers of really successful players.

There is a completely different naming scheme for cyclones originating in the North Indian Ocean with Bangladesh, India, Maldives, Myanmar, Oman, Pakistan, Sri Lanka, and Thailand contributing names to the all-star lineup. My guess is that India contributed Akash, Bijli, Jal, Lehar, Megh, Sagar, and Vayu. I’ve got no problems with these, although they’re kind of unoriginal. I mean doesn’t India use some of these names for the space program too?

The other countries don’t do much better either, I’m afraid (with notable exceptions like Chapala). Remember Sidr and Nargis from previous years? Well, coming up in a few years are Bulbul and Priya which sound like affectionate names for charming little girls.

Why can’t we name cyclones so that people take them seriously for the death and destruction they cause?

I mean why would I take any weather formation called Titli seriously? I’d think to myself, “It is probably only going to be a mild breeze with a few fluffy clouds and rainbows. I’ll just rent a DVD and order a pizza for delivery.”

It would be a completely different story if I heard about a cyclone named Kaali Maut (Black Death); by now, I’d be wrapping my lungi around my torso already halfway up a palm tree.