The sky and the water were two different shades of mud. The distant bank where the Rupnarayan River met the Hooghly distributary of the Ganges River was a thin sliver. Walking along the road that hugged the side of the Hooghly, we noticed more silt and the carcasses of various rusting ships that had been abandoned. A group of street urchins began to follow us. We reached the edge of docks when one pointed out what appeared to a human leg with a tennis shoe floating next to the steel support of docks. Perhaps, someone had fallen over and had been carried away by the treacherous currents to this spot. The confluence of the Rupnarayan and the Hooghly rivers was a graveyard for both ships and humans. 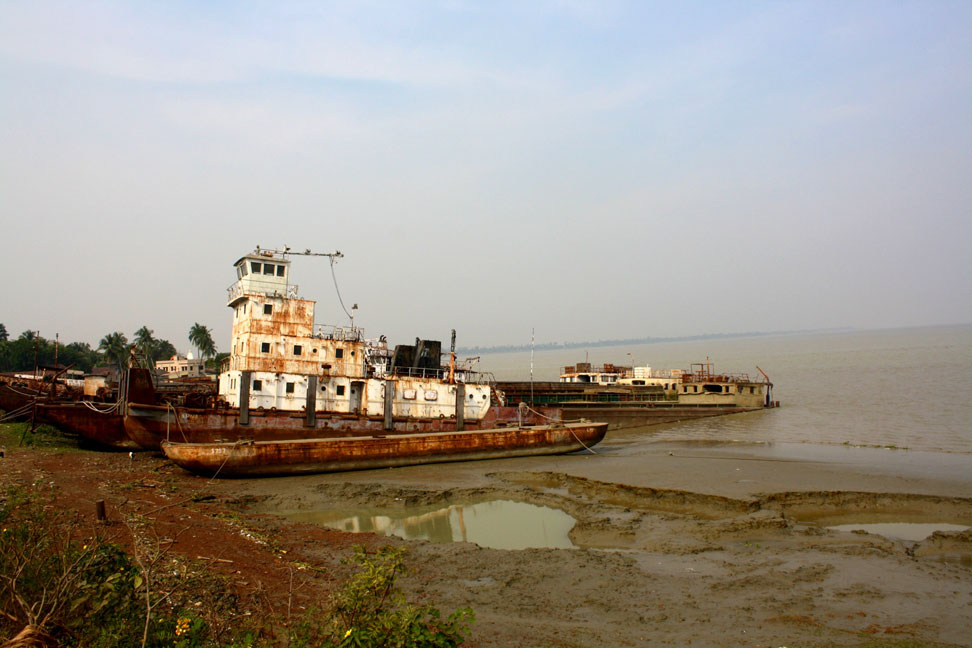 But it wouldn’t be the first time that such a tragedy befell someone. History is replete with many similar tales involving both local villagers and colonialists who were sucked in by the ever-shifting quicksand and silt of these rivers.

How much had the Gangetic delta of West Bengal changed over the centuries? I was curious, so I turned to all the sources I could find. In The Early Annals of The English In Bengal by Charles Robert Wilson, published in 1895, there is a valuable hand-drawn map depicting the course of the Hooghly River based on maps of early colonialists from the sixteenth century. I superimposed this map on to a current day aerial map of the delta region of the Hooghly River from Google Maps. I discovered that while much of the Hooghly River traversed a remarkably similar path even after more than four centuries, the deltaic region was markedly different. Of course, comparing a hand-drawn map of early colonialists with a more exact modern map invariably lead to some differences in scale, but even in my lifetime the landscape of the deltaic region of Bengal had been changing due to the massive amounts of sediment the rivers carried from across the Gangetic Plains. 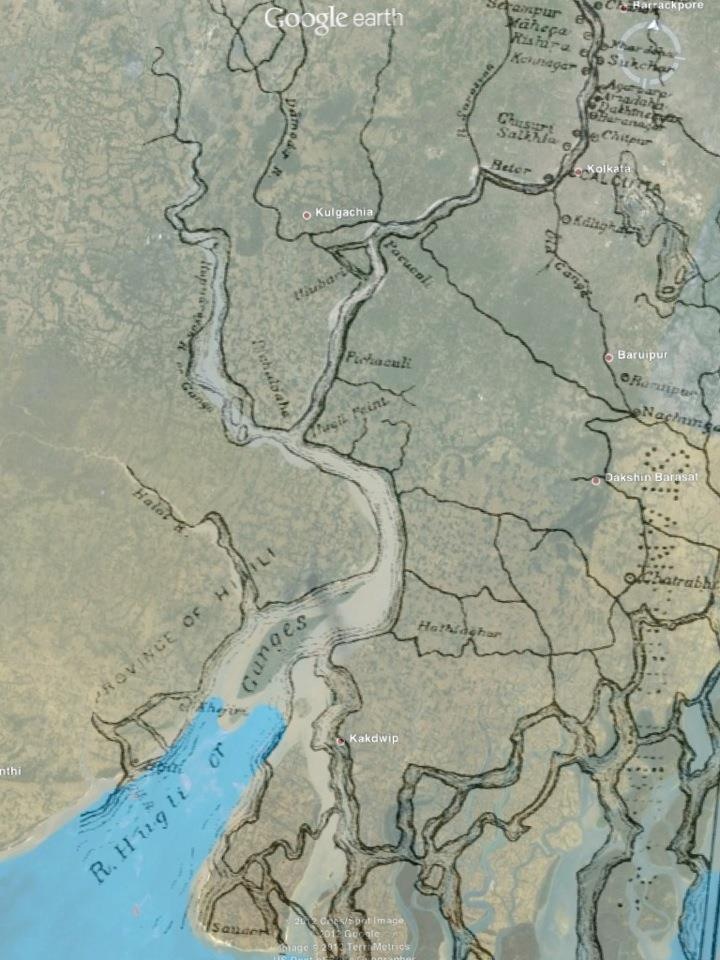 Even one hundred years ago, Nayachar, a large island off the coast of the port town Haldia, did not exist, though it can easily be spotted on a map and visited today.

When Job Charnock established the city of Calcutta as the hub of the East Indian Company at the site of local villages on the Hooghly River, little could he have known that it would soon become one of the most significant cities in the most powerful empire the world has ever known.  To establish the foundations of the mercantile and colonial powers, it immediately became essential to navigate the shape-shifting Hooghly River to ship men, materials, and ideas for the establishment of the imperialist infrastructure. But Charnock, who is now buried in a quiet spot at Park Street in the city he founded, did not live long enough to see Calcutta become a world city and an outpost of the British Empire in Asia.

In 1693, Francis Ellis became Charnock’s immediate successor. The noted writer, Sir Evan Cotton recalls in Calcutta, Old and New: A Historical & Descriptive Handbook to the City (1907) that Ellis was “a man of little character or ability.” Back then seas and rivers were highways, train-lines, and air-routes combined. Disaster struck the young colonial city within a year of Ellis assumed office, though in this case, to no immediate fault of his own. Cotton recounts the story of The Royal James and Mary which was on its way to Calcutta from Sumatra with a valuable cargo of trading supplies. On 24 September, 1694, this ship struck a dreaded shoal at the junction of the Hooghly and the Rupnarayan rivers, near the spot I was visiting. The Royal James and Mary quickly turned over and sank, thus giving rise to the name of two moving quicksands “James and Mary” that would plague numerous travelers for centuries. In fact, navigating the last stretch of river extending from the Bay of Bengal up to Calcutta was perhaps more difficult that passage across the oceans!

During most of the 1800s through the early `1900s when the Hooghly was still navigable up to Calcutta for large vessels, such was the value of this route and the difficulty in its passage that there were expert “pilot sahibs” in the employ of the British Raj who guided ships through the last stretch.  Cotton says of these expert navigators that they were familiar with “every inch of the eastern channel” and that they knew all the tales of the wrecks therein.  Because the river bed changed more or less daily, charts were completely useless. Current river conditions were recorded hourly, much in the same manner than meteorological and traffic data is noted today, and these data were telegraphed up to Calcutta, from where it could be transmitted to stations down the coast. The development of the telegraph in India, and the first experimental lines from Calcutta to Diamond Harbour (which later extended down to Khejuri) was therefore necessary to stay up-to-date with the conditions of the Hooghly and Rupnarayan rivers.

The importance of keeping the river navigable cannot be understated. Calcutta, was the seat of the British Empire in the jewel in the crown. In those days, navigation from Europe was almost exclusively by sea. One could leave for Calcutta by steamer from ports as far away as Southampton and Marseilles.

The city was very different back then as well. The vast plain, or Maidan of Calcutta, was during the late 1700s, a massive swamp, and many solid streets that came up in later centuries were navigable waterways. Devastating cyclonic storms impacted the city, which resembled more Venice than it did London.

Travel to Calcutta remained perilous through the 1800s. The British administrator and archivist, William Wilson Hunter commented on the perils of travel to Calcutta via the Hooghly river in his monumental series, The Imperial Gazetteer of India in 1885. He writes, “shifting quicksands are rapidly formed, and the channels have to be watched and sounded and supervised with almost the minute accuracy which a watchmaker would give to the repair of a delicate timepiece. If a vessel touches the bottom, she is pushed over by the current.” Many ships sank quickly in the water, including the ill-fated County of Stirling which sank in 1877 in eight minutes and a British steamer in 1878, which capsized in two minutes, resulting in great loss of property and life.

One of the most captivating eyewitness accounts of the difficulty in navigating the Hooghly River sandbanks is provided by a British solider, John Arthur Bayley, on his first assignment to India in Reminiscences of School and Army Life, 1839 to 1859 (1875). Bayley wrote at length on the horror of capsizing in what seemed to him to be a calm stretch of river.

“Everybody was on deck and the officers of the ship were pointing out the position of the quicksand which a ship of large size towed by a steamer was on the point of crossing just before them, The steamer with her long tow rope had followed a bend in the river, but the ship being badly steered followed the chord of the arc. Suddenly, it was evident that something was wrong with her, and she slowly heeled over.”

“’She’s touched,’ cried the crew of the Barham, and touched she had with a vengeance, for in half an hour, ship, masts, and all had disappeared, the crew having just had time to escape in their boats.”

So much has changed in hundreds of years. The British left. Bengal was partitioned. Calcutta became Kolkata. In the interim, many other forms of transportation developed and travel by ship across the kalapani  to Britain is not on anyone’s mind anymore.

Sitting by the bank, still, I couldn’t help but share Bayley’s thoughts. The confluence of the Rupnarayan and the Hooghly seemed so wide. The water seemed calm. There were people living in huts right up to the edge of the water. 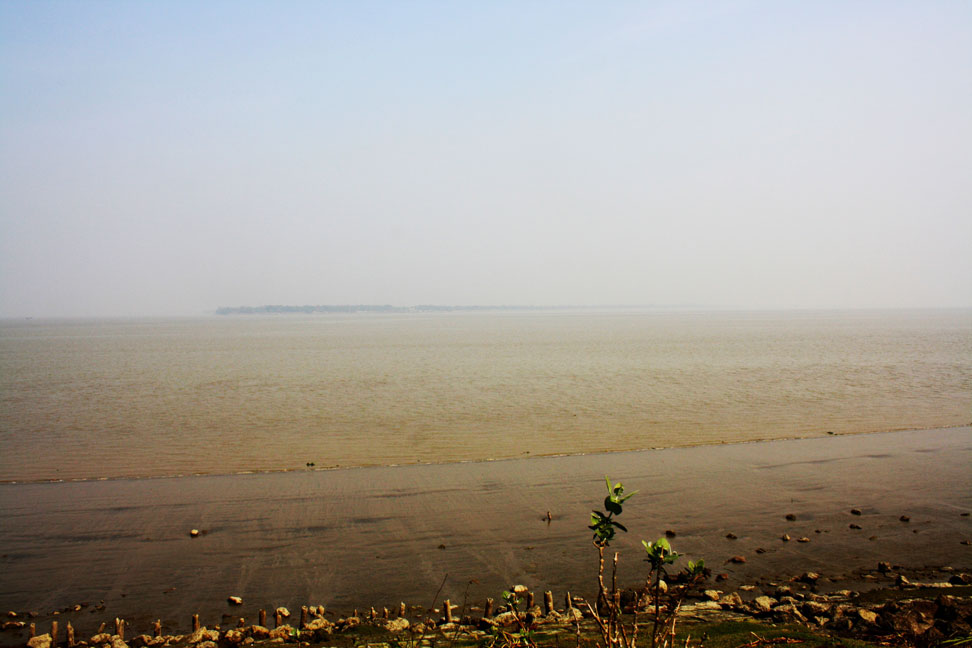 It is very much a false sense of security. The swift currents and the dangerous sandbanks have not gone away, as our discovery of the dead man in the water reminded. I recall a report in The Telegraph newspaper from just the last decade. One of the few passenger liners  that still embark from Kolkata (for Port Blair) MV Harshavardhan, ran into silt close the confluence of the Hooghly and the Rupnarayan rivers in 2002 with 700 people onboard. Fortunately, Indian Coast Guard was able to rush to the spot, so there was no loss of life. The ship was also salvaged, so ultimately this story has a happy ending.

Clouds descended over the rivers. So many ships with buried treasures and the ghosts of passengers were hidden in these murky waters. 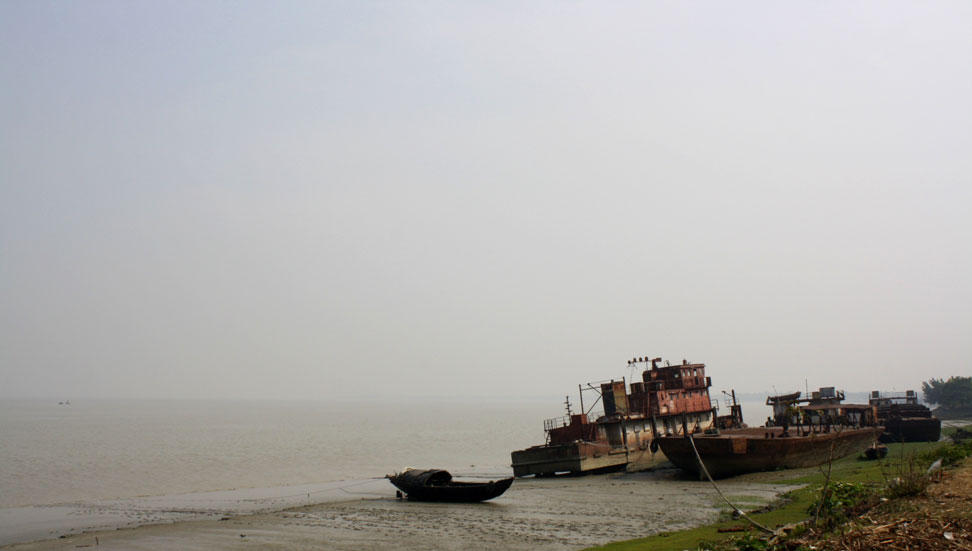